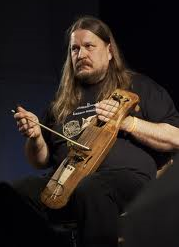 Rauno Nieminen is a Finnish musician, instrument builder and a researcher. He has played and built instruments since the 1960's, and since 1984 he has also taught how to make instruments. His main instruments are jouhikko and kantele, but he also plays several different types of traditional Finnish flutes, jew's harp, guitar, mandolin, bass, washing board, triangle, different harps and accordions. Rauno is one of the influential people in the resurgence of jouhikko. He has writa a PhD about jouhikko at the Sibelius Academy 2008.