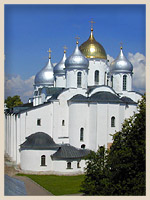 The second NRF Open Meeting, Northern Veche, took place in Veliky Novgorod, Northwest Russia, from the 19th to the 22nd of September 2002. The event was organized by the NRF Secretariat and Steering Committee, the 2nd NRF Organizing Committee in Veliky Novgorod, and the Northern Research Forum of Russia. Within the venues of the Novgorod Oblast Administration Main Auditorium and Yaroslav-the-Wise Novgorod State University campuses, Northern Veche attracted a wide range of stakeholders with 172 participants, 114 males and 58 females. Participants included heads of state and autonomous regions,

As a precursor to the second NRF Open Meeting in Russia, the NRF secretariat released, in both Russian and English, an Introduction to the 2nd NRF by Lassi Heininen, Chairman of the NRF, and 14 essays, or "position papers," written specifically for the event by people prominent in Northern issues and activities from a variety of backgrounds. These people were asked to write a 4-5 page commentary on what they see on the horizon within the next several years, as far as the critical issues, problems, and opportunities facing their region and people, stakeholder group, or the circumpolar north in general. In focusing on one to several of the themes that had been identified for the Open Meeting, position paper writers were also asked to address the question of what they see as the current opportunities for, and barriers to, research in the circumpolar north. The introduction by NRF chairman Heininen and the position papers can be viewed here, but they were meant to serve as a springboard inspiring discussions during the Open Meeting. These papers will be published, along with the presentations and other products of the Forum, in a book in both English and Russian, as well as on the NRF web-site.

Young researchers, as rapporteurs, gave oral reports reflecting their personal impressions of, and ideas, proposals and initiatives emerging from the plenary, business and project sessions. The session headings in the program provide links to the written versions of these individual summary reports. Extensive discussions followed, where participants expressed their experiences and views of the second NRF Open Meeting and their aspirations for the NRF as a forum and as a process. Participants also wrote on special evaluation forms that were distributed.