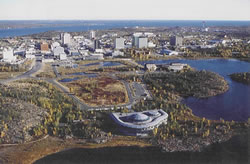 The event was hosted by the Government of the Northwest Territories, the City of Yellowknife, Aurora College, and the community of Rae Edzo, and organized by the Northern Research Forum in cooperation with the Canadian Polar Commission.
Yellowknife is a culturally rich capital thriving with diversity, and home to over 18,000 people. Located on the shores of the beautiful Great Slave Lake, only 512 km south of the Arctic Circle, known for its outdoor recreation, midnight sun, aurora borealis and an unusual blend of northern culture... a city where history is found throughout a modern, bustling metropolis.

Yellowknife is literally built on gold, with the tunnels of gold mines burrowing deep beneath the streets, a city where "the gold is paved with streets". Yellowknife is the centre for transportation, communication, recreation, commerce, tourism, health care, mining and government for the Northwest Territories. With the recent discovery of diamonds north of the city, Yellowknife faces a brilliant future as a home to diamond manufacturing and retail activity. Ekati, North America's first diamond mine which officially opened on October 14, 1998, has reached a milestone and produced its first million carats.

Visitor Visa
For the purpose of obtaining a visitor visa to attend the 3rd Northern Research Forum (NRF) in Yellowknife, Canada, in September 2004, Citizenship & Immigration Canada has information on how to apply as well as the application forms. The Visa application form and contact information for Visa offices can be found at the following links:

Please apply for a visa in good time. However, you should first, and as soon as possible, register for the 3rd NRF Open Meeting on-line, and on the Registration form you must enter in the appropriate box the dates of your expected arrival in, and departure from, Canada. The Canadian Polar Commission will use this information in order to write an special invitation letter which will be sent to you and to the appropriate Canadian Embassy or Consulate which will issue a Visitor Visa for you.